Two helicopter flights for one family 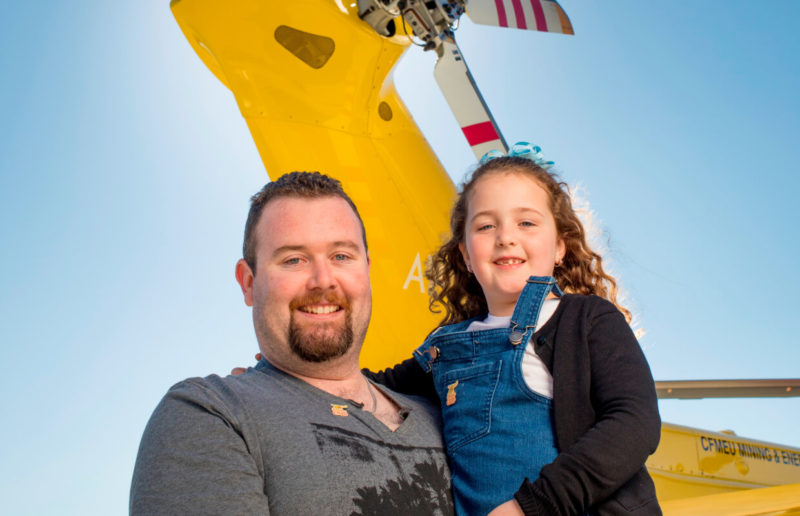 It was a cool July morning, Kylie was at home. Her mind was full of things to do. She and Steve were planning their wedding in October and their German Sheppard Husky puppies were full of beans.

She was listening to the radio and heard a report of an accident at Whittingham, however she continued about her day without another thought.

Soon after there was a knock at the door. She opened it to find police on her doorstep telling her that Steve had been in an accident at Whittingham and was being transferred to the John Hunter Hospital by the Rescue Helicopter.

Steve was an electrical contractor at a power station and was on his way to work when a woman in her forties lost control of her car and hit the small white Festiva Steve was driving.

Kylie and her mum travelled to the hospital where she was told Steve was in a critical condition after sustaining a broken pelvis, dislocated knee with severe ligament damage, a broken foot, dislocated wrist, head injuries and substantial bruising.

Steve spent about four weeks at the John Hunter before moving to Maitland Private Hospital where he spent almost nine weeks in rehabilitation.

“Steve was determined to be able to walk down the aisle… and we did, but just not on the original date of 4 October. It was about three months later, once Steve was out of the wheelchair,” Kylie said.

Fast forward eight years, when one of Steve and Kylie’s children, Jasmine, became ill while they were visiting family on the Mid North Coast, the couple had mixed emotions when doctors at Port Macquarie Base Hospital told them she needed to be flown to the John Hunter.

“Steve’s parents told us to take the night off and go out for dinner – a rare treasure with young kids. Jasmine was well and went to bed normally. A little while later she was awake and staring into space. Mum called us home and we called an ambulance,” Kylie said.

Jasmine experienced a number of unexplained seizures over five hours so the decision was made to call the Rescue Helicopter to airlift the three-year-old.

“I don’t remember anything about the day I was in the car accident. I don’t remember the flight, but I knew that I was best to stay with our other kids and get them back to Newcastle safely so I told Kylie to fly with her. I knew they were in great hands,” Steve said.

“I remember watching out the window as the helicopter made its way south, thinking how beautiful our country was. While my mind was on Jasmine, I also remember thinking how lucky our community was to have the Rescue Helicopter,” Kylie said.